I ‘get’ Donald Trump; and in the same way I learned how to interpret Obama-speak, I also developed an ear for his lies. It just took some listening.

Obviously, Trump knows how to tap into Americans’ fear of imminent annihilation at the hands of her enemies, real or imagined; but he is woefully ignorant about foreign affairs and national security. Here’s how you can tell.

Trump lied about having said in advance of our invasion of Iraq in 2003, that the war would be a mistake and de-stabilize the Middle East. In fact, he said that in 2004, along with everyone else, pre-Surge. Interviewer Howard Kurtz caught him in the lie, in this in-person exchange on October 11: ‘You said that in 2004; by then, everyone knew the occupation was a mess. But I can find no evidence that you spoke earlier than that. Did you say that in 2003, before the invasion?’ Trump’s reply: “Yes!”

At the end of that part of the interview with Kurtz, Trump repeated the ‘lie’ indirectly, now fudging the truth. ‘You saw my statement, I was against the war,’ as if Kurtz had actually corroborated his earlier lie instead of calling him on it.

Last night, December 15, during the Republican debate on CNN, Trump repeated the lie Kurtz caught him in more than two months earlier. Only, having failed to pull the wool over Kurtz’s eyes, this time he fudged the lie by changing the date of his anti-war statement so as to ‘cover’ the date of the invasion. ‘I came out against the war in Iraq in 2003/2004, I said it would de-stabilize the Middle East, and I was right.’ After the debate, he was interviewed by Chris Matthews. Now, without being asked a direct question, on point, he re-fudged the lie to counter Kurtz’s previous concerns; by surrounding the newly fudged date – 2003/2004 – with words that now would likely be misinterpreted by the lay listener, as indicating a pre-invasion prediction. ‘I predicted going to war with Iraq would de-stabilize the Middle East, back in 2003/2004!’

Then, there was the radio interview with Hugh Hewitt on September 3. But first, a little context.

Immediately after the U.S. completed negotiations with Iran for that horrendous nuclear agreement in July; Maj. Gen. Qasem Soleimani, head of Iran’s elite military Quds Force, went to Russia to meet officials there in violation of a U.N. travel ban. It was in all the papers.

The U.S. will also raise its concerns at the United Nations and pursue the matter through the Security Council. U.S. officials said they believe Maj. Gen. Qasem Soleimani, head of Iran’s elite military Qods Force, went to Russia in late July to meet officials there in violation of U.N. travel ban.

The complaint, and Gen. Soleimani’s trip, come at a sensitive time for the Obama administration. It is working to sell skeptical lawmakers on a nuclear agreement it reached with Iran and several other countries that it has said will prevent Iran from developing a nuclear weapon in exchange for relief from numerous sanctions. Many critics of the White House’s agreement have said Iranian officials cannot be trusted, and Gen. Soleimani’s trip to Russia despite his travel ban could further inflame critics.

Here is the video of the pertinent segment of the interview, followed by the transcript of the exchange.

HH: Are you familiar with General Soleimani?

HH: He runs the Quds forces.

HH: Do you expect…

DT: And I think the Kurds, by the way, have been horribly mistreated by us…

HH: No, not the Kurds, the Quds forces, the Iranian Revolutionary Guards, Quds Forces the bad guys.

HH: Do you expect his behavior to change as a result…

DT: Oh, I’m sorry, I thought you said Kurds, because I think the Kurds have been poorly treated by us, Hugh. Go ahead.

HH: Agreed. So Soleimani runs the Quds Forces. Do you expect his behavior is going to change as a result of this deal with Iran?

DT: I think that Iran right now is in the driver’s seat to do whatever they want to do. I think what’s happening with Iran is, I think it’s one of the, and I covered it very well. I assume you saw the news conference. I think Iran is, it’s one of the great deals ever made for them. I think it’s one of the most incompetent contracts I’ve even seen. I’m not just talking about defense. I’m not talking about a contract with another country. I’ve never seen more of a one-sided deal, I think, in my life, absolutely.

HH: Well, Soleimani is to terrorism sort of what Trump is to real estate.

HH: Many people would say he’s the most dangerous man in the world, and he runs the Quds Forces, which is their Navy SEALs.

DT: Is he the gentleman that was going back and forth with Russia and meeting with Putin? I read something, and that seems to be also where he’s at.

DT: He’s going back and forth meeting with other countries, etc., etc.

HH: And so do you think…

(Note: this last line of that segment of the interview only makes sense to me if Trump, having no idea what Hewitt was talking about; looked up the name “Soleimani” while on the phone, and came up with a headline about the general’s visit to Russia. Now, everyone else already familiar with that situation opined, Soleimani was visiting Russia to arrange weapons sales. But with no time to bone up on the transaction; Trump appears to have inferred from the headline that the ‘bad’ man from Iran is being welcomed by world leaders, which visits he – Trump – finds disrespectful to the U.S., ignorant of both the implications of the general’s visit to Russia viz-a-viz the newly negotiated (arms) agreement with Iran; and the travel ban violated by that visit.)

Beginning the day after Hewitt exposed Trump’s ignorance of foreign policy, Trump sought to re-cast what had occurred, expanding his criticism now to encompass the incompetence of his host. “I thought he said Kurds, this third-rate radio announcer that I did the show – it was like got you, got you – every question was do I know this one and that one?  It was like he worked hard on that. But I thought he said Kurds.” 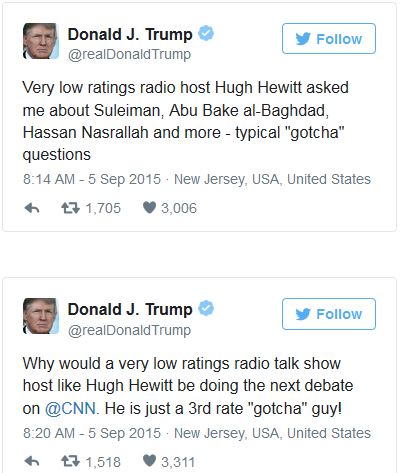 A full two weeks later, at the September 15 Republican debate on CNN, Trump blamed his confusing for “Kurds” Hewitt’s use of the words “Soleimani” and “Quds Forces”; on the fact, “Hugh was giving me name after name, Arab name, Arab name, and few people anywhere, anywhere that would have known those names.”

Only, as the audio of that earlier Hewitt interview, posted above, clearly evidences, no such “Arab names” were cast, until several minutes after Hewitt asked Trump about “General Soleimani,” who “runs the Quds Forces,” and Trump screwed that up with “Kurds.”

In other words; once Trump is caught in a lie about an issue central to the campaign, here, national security and foreign policy; listen for his follow-up references to that lie, woven into subsequent conversations, each time re-cast in a not-so-veiled attempt to make his telling the original lie seem to portray him as being less dishonest.

And why does he care so much about these particular lies? Because even Trump is smart enough to be scared to death the truth will be revealed: he is woefully ignorant about foreign affairs and national security.

My mind is a terrible thing to waste.

This entry was posted on Wednesday, December 16th, 2015 at 14:14 and is filed under Uncategorized. You can follow any responses to this entry through the RSS 2.0 feed. You can leave a response, or trackback from your own site.

One Response to LIAR LIAR PANTS on FIRE