Thanks to the Republican Party of Texas (“RPT”) I am able to amend some misleading information I posted in the previous article, BALLOT ENTITLEMENT LAWS should DISQUALIFY PRESIDENT OBAMA in TEXAS. How they came to aid in this clarification, is a hoot!

On Wednesday, April 18, at around 5:30 PM EDT, I received a call from kjcanon, in TX. “Are you sitting down?” Needless to say, I was by the time I answered her question.

Seems she had just received a call from Mr. Jesse Lewis, who is the Executive Director of the RPT,  concerning her open records request. (She had listed her telephone number on that request.) According to Mr Lewis, the documents she asked for had already been forwarded to the email address she provided, and he wanted to know why she would claim otherwise. Immediately, she thought back to that complaint she had just filed 2 days earlier with AG Abbott, charging that Steve Munisteri, Chair of the TDP, a public official under the Public Information Act inasmuch as he certifies candidate names to the ballot; had refused to produce public records she requested, which were the basis of his certification. Could that office have possibly followed up so quickly? She asked Mr. Lewis what was the source of his information: “…I saw the JBJD (sic) blog…”

Turns out, the RPT had sent the materials on April 5, to the wrong address and then, seeing my blog, on Tuesday, re-sent the materials, again to the wrong address. Finally, after contacting kjc on Wednesday, they got it right. They also asked her to pass on this information to me, which she did. (They didn’t ask her to withdraw the public information complaint she had filed with AG Abbott but she did that immediately, too.)

Here are those RPT emails.

Notice that 2 documents were attached: one, designated “20120405091443653.pdf,” which contained multiple candidate applications to the ballot; and the other designated “order on party conventions.pdf.” This second attachment leads to the other subject raised by Mr. Lewis, which we will discuss first.

As the result of a settlement recently reached among the parties in the TX redistricting lawsuit, the dates were changed for several key party functions during the primary season, including the voting by party members during the actual primary contest and, the holding of the party state convention, which changes now conflicted with existing state statutes. Consequently, the federal district court ruling on redistricting matters (on remand from the SCOTUS) issued several orders with respect to these new dates, in which all such inconsistencies were addressed. (Four such orders were issued between February 28 and March 1!) Here is a snippet from an Order entered on February 28:

Mr. Lewis, again obviously referencing the article he had read here on the “jbjd” blog, now informed kjc that, according to item “d” of this redistricting court order; the RPT wasn’t required to submit its rules to the SoS by January 5, the date which appears in the statute, in order to preserve the entitlement of their candidates to appear on the ballot, anyway! He would send along that court order for her reference.

Now, having not yet seen any of the documents to which kjc referred, I could only ‘guess’ at why Mr. Lewis was wrong. I reasoned that, obviously, a rule determining federal qualifications was not impacted by a court order necessitating changes in filing deadlines, which, without the court’s exception, would conflict with existing state laws. Then, I saw the order. The modifying language in section “d” makes clear, the only party rules exempted from the deadlines contained in those specific statutes, are those rules which must be modified pursuant to the changes imposed by the order, on the timetable for events occurring during the course of the primary season.  (Perhaps that’s why the RPT entitled that attachment, “order on party conventions.”) There is also this, from SoS Andrade:

All dates, deadlines or requirements not specifically adjusted by the federal court order remain as required under state or federal law. Calendar of Important Dates for Candidates for the 2012 Primary and General Elections

Before I complete the discussion of the rules, I want to focus on the other attachment which came in the mail, the Presidential candidate applications.  According to Mr. Lewis, the applications “are the only documents used to certify these candidates place on our ballot.” So, we looked for something in the form which confirms that the candidate has established meeting “federal” “qualifications.” Here is the form submitted by Charles “Buddy” Roemer. 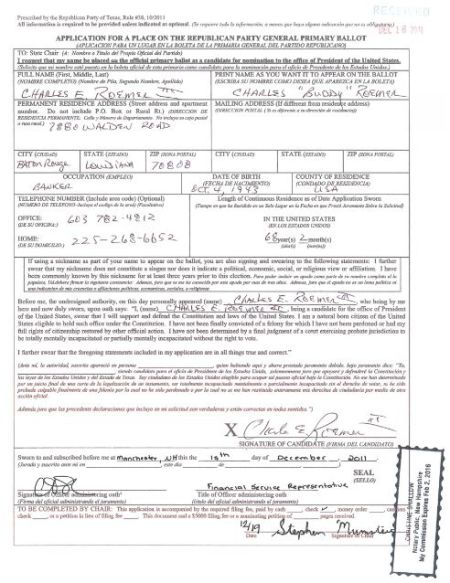 Notice that this contains an oath or affirmation from the applicant swearing s/he satisfies the Constitutional requirements for the job.

Now, look at the TDP form submitted by Barack Obama (which also appeared on the previous post.)

No such self-authentication. (Had you already noticed that the application form supplied by the TDP contains no such oath or affirmation?)

Either way, neither the RPT nor the TDP can be said to ‘certify’ a Presidential candidate has met federal qualifications when the only basis for that certification is the candidate’s self-authentication.

Anyway, that was just the beginning of our work. On the RPT form, in the upper left corner, I noticed this blurb: Prescribed by the Republican Party of Texas, Rule #38, 10/2011. So, the RPT ostensibly has a rule with respect to establishing a candidate for President is federally qualified? How did we miss that? We searched through the RPT rules (and the TDP rules) for anything containing the numbers “191” or “192,” the sections of TX statutes dealing with Presidential candidates, and found nothing. Now, we looked at the RPT’s rule 38. Here is the section of that rule relating to the candidates’ applications:

Rule No. 38 – National Convention Delegates and Alternates – Amended February 29, 2012
Section 1. Presidential Primary, Application of Rule
…
Section 2. Method of Qualifying as Presidential Candidate
a. Filing: Any person eligible to hold the office of President of the United States may qualify to participate as a Presidential candidate in the presidential primary by filing with the State Chairman, not later than 6:00 p.m. the second Monday in December of an odd-numbered year preceding the presidential primary, a signed and acknowledged application for his or her name to be placed on the Presidential Primary ballot, accompanied by a supporting petition signed by a minimum of 300 registered voters of the state from each of a minimum of fifteen (15) Congressional Districts, or the payment of a filing fee of $5,000.
…

So, yes, both the TDP and the RPT filed ‘rules’ with the SoS by deadlines created either in the statute or through the court order(s). But neither party preserved its entitlement to the ballot by filing a rule that spelled out how it would determine conclusively so as to certify to the Sos; both the Presidential and Vice Presidential candidates are federally qualified for the job.

This entry was posted on Thursday, April 19th, 2012 at 19:04 and is filed under Uncategorized. You can follow any responses to this entry through the RSS 2.0 feed. You can leave a response, or trackback from your own site.