The Supreme Court has the final authority to interpret the Constitution.  It can set aside any law – federal, state, or local – that a majority of the justices believes conflicts with any part of the Constitution.

(For a more legalistic discussion of the authority of Article III courts, see http://www.law.cornell.edu/anncon/html/art3frag14_user.html#art3_sec2)

No matter how many times or how strenuously people repeat the absurd claim that the definition of NBC in the U.S. Constitution is fixed by reference to any other written work, nothing fixes a definition of NBC until the ‘fat lady holding the scales of justice sings.’

In other words, until justices on the federal appellate court weigh in with a definition in a holding in a case specifically on point.  All else is cacophony.

Lie number 1. We know what NBC means because this term is defined in Vattel’s Law of Nations.

Just for the sake of argument, let’s say, this man Vattel wrote a book entitled Law of Nations in which he pontificated as to which of the laws of various nations he would incorporate into his Utopian country, and that the term NBC is unambiguously defined within this text.  Let us further assume that before deliberating on their own treatise, better known as the U.S. Constitution, the original drafters had access to Vattel’s tome, considering such variables including the date and place of publication, language, and availability; and that they did, indeed, read his definition of NBC before drafting our Constitution.

Assuming all that, it is nonetheless absurd to make the leap of logic that says with certainty, the Drafters, having read Vattel’s definition of NBC and understood his meaning, thereby adopted his definition into their text.  Because based on this logic that insists, any subject mentioned in the Constitution evidences a  concurrence with its counterpart in Vattel’s Law of Nations; we would also have state sponsored mandatory public worship of God and banishment of minority practitioners, instead of “Congress shall make no law respecting an establishment of religion…” 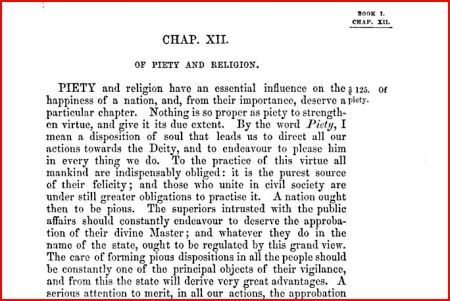 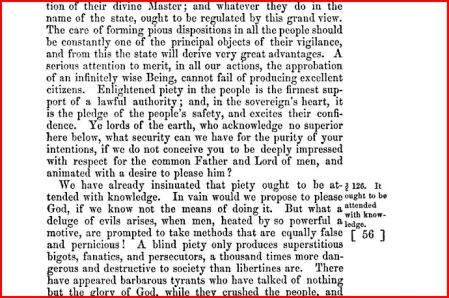 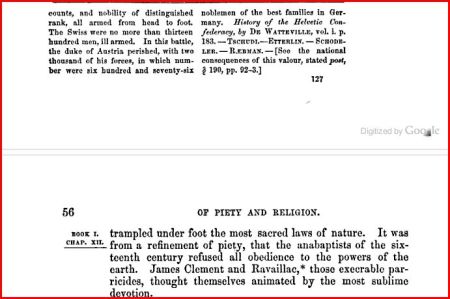 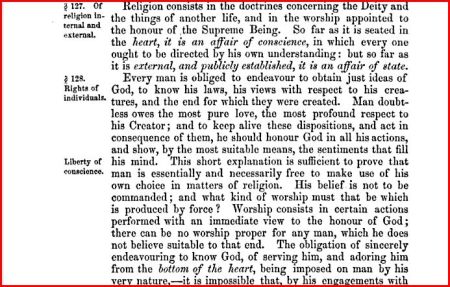 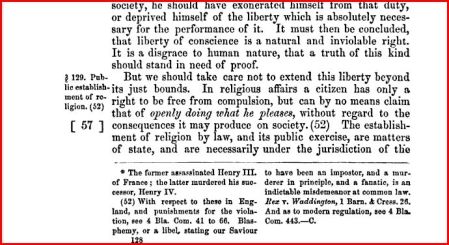 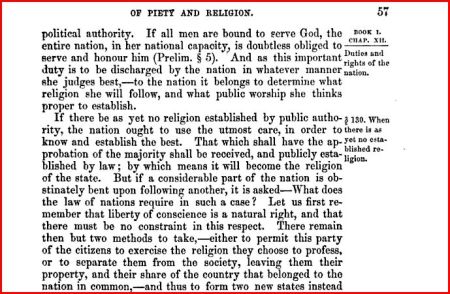 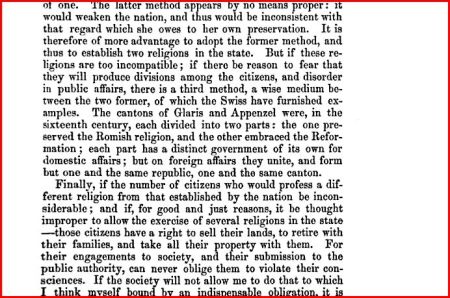 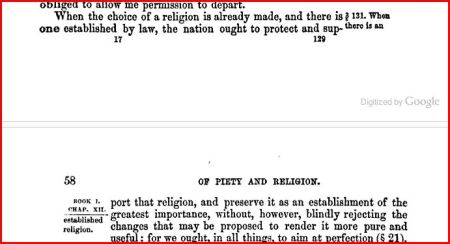 Lie number 2. We know the Drafters meant for us to follow Vattel’s definition of NBC in Article II, section 1 because they specifically referenced “Law of Nations” in Article I, section 8 (“To define and punish piracies and felonies committed on the high seas, and offenses against the law of nations”)

Setting aside the colonial custom of capitalizing nouns, let’s assume, again, this reference in Article I, section 8 adopts Vattel’s treatment of piracy exactly as laid out in his book (as opposed to a generic standard of responding to piracy on the high seas, according to laws of various nations sailing the seas).  According to the rules of statutory interpretation, this would not only not mean,  the Drafters intended the definition of NBC to echo Vattel’s definition; but it would mean precisely the opposite!  That is, by using the reference to Law of Nations in one place in the document but not the other, the court would find the Drafters intended not to mean the definition proffered by Vattel.

“[W]here Congress includes particular language in one section of a statute but omits it in another section of the same Act, it is generally presumed that Congress acts intentionally and purposely in the disparate inclusion or exclusion.” Russello v. United States, 464 U. S. 16, 23 (1983) (internal quotation marks omitted).  http://www.supremecourt.gov/opinions/08pdf/08-5274.pdf

That is, given that the Drafters obviously knew how to reference Vattel in one part of the Constitution, this means, if they had wanted to reference his work in another part of this legal document, they likely would have.  Yet, they failed to repeat the phrase either in Article II or anywhere else in the document.

But definitively attributing the phrase “Law of Nations” in Article I to Vattel’s text and not to a general world standard of laws, is absurd on its face.

John Jay, Alexander Hamilton, and James Madison wrote the Federalist Papers so as to persuade the special Constitutional panels in the 13 states to ratify the newly drafted U.S. Constitution to replace the inadequate Articles of Confederation.  In Paper 83, Mr. Hamilton addresses the construction of Article III, the federal judiciary, arguing for a right to trial by jury in all criminal cases but not in civil cases.  (All emphasis added.)

But this is not, in my estimation, the greatest objection. I feel a deep and deliberate conviction that there are many cases in which the trial by jury is an ineligible one. I think it so particularly in cases which concern the public peace with foreign nations that is, in most cases where the question turns wholly on the laws of nations. Of this nature, among others, are all prize causes. Juries cannot be supposed competent to investigations that require a thorough knowledge of the laws and usages of nations; and they will sometimes be under the influence of impressions which will not suffer them to pay sufficient regard to those considerations of public policy which ought to guide their inquiries. There would of course be always danger that the rights of other nations might be infringed by their decisions, so as to afford occasions of reprisal and war. Though the proper province of juries be to determine matters of fact, yet in most cases legal consequences are complicated with fact in such a manner as to render a separation impracticable.

Or, just scroll back to Vattel’s own text, in which the phrase “law of nations” and permutations appear generously.

Lie number 3. We know what NBC means because this term is defined in a law review article; and the Boston Globe°; and dicta in several Supreme Court cases not directly on point.

° This lie is especially pernicious, for 2 (two) reasons.  First, it falsely implies the theories of the speaker are supported by the imprimatur of the editors of the Boston Globe! In truth, an advice column appearing in the newspaper more than 100 years ago,contained what the writer stated was his personal opinion, namely, the words “native born” and “natural born” appearing in the Constitution in relation to the word “citizen” mean two different things.  Second, it disingenuously sustains a fabricated claim that the words “native born” and “natural born” can honestly be conflated to mean the same thing and then uses the personal off-the-cuff opinion of the columnist to hyperbolically deflate such contention.  Ha, the ‘legal’ pundit pedaling this tripe calls the Globe piece a “crucially relevant article.”  Straw dogs.  As I indicated in the beginning of the present post, following  the basic rules of statutory interpretation necessarily leads to the conclusion that, because the Drafters used “native born” in one section of the document and “natural born” in another section; the courts would assume they intended “native born” and “natural born” to mean two different things!

I cannot say what the Founders intended by the term NBC.  But I am troubled by the willingness of so many purported “patriots” to supplant reason with their interpretation of the document those Founding Patriots created. Of course, I have studied history; of course, I have studied the law. Naturally, I have opinions. But I am not the arbiter of the Constitution’s truth; and neither are any of those internet pontificators, lawyer and layperson alike, who claim otherwise.

I could not care less as to the individual interpretations people ascribe to the original intent of the Drafters; or whether they adopt a Constitutional methodology of original intent or ‘living document,’ to reach their conclusions. But I am as fearful of becoming enslaved by zealots on one side as on the other.  Let me emphasize, just because a particular lay interpretation appears to make sense to lay people does not mean it could survive critical judicial scrutiny. (Keep in mind, many of the people involved with founding this government were trained as lawyers.) If I point to a flaw with the legal methodology, this does not mean, I am pointing to a flaw in the character. That people continue to label theories of statutory construction as ‘belonging’ to one person or another scares the hell out of me. Practically speaking, the meaning of the Constitution is only ascertained when the federal bench rules, this it what it means. This is why I seldom express my personal views as to what the document means; or engage in endless speculation as to what the Constitution means. I am too busy doing actual work aimed at changing the status quo.

While there are few absolutes in interpretation, certainly we can all concede that no interpretation is valid or invalid based only on who is espousing that view.  So, in conclusion, I want to repeat my strenuous objections that some people, expressing an opposing view to the positions discussed in this article, continue to direct such dissent to me and not to the work.  I suspect these bullies are intentionally misleading people by clinging to discredited theories of Constitutional interpretation in order to sidetrack attention and energies which could be better utilized to challenge the legality of those Certifications of Obama’s nomination submitted in several ballot eligibility states.

Because in the end, Obama will not be removed from office on the basis of a legal definition of NBC, anyway.  Even if  documents available in the public record could establish the facts of his birth, which facts could then be fit into such legal definition of NBC.   Because no law required the Electors to only elect a President who meets the Constitutional eligibility for office, anyway.  But we have no such facts of birth or legal definition of NBC.  However, we definitely know the definition of “C.”  Because the SCOTUS has previously ruled on this issue in several cases directly on point.  This means, we can confront anyone who Certified to state election officials in applicable states, candidate Obama was qualified for office, with this question: on what documentary basis did you ascertain beforehand he was a U.S. Citizen?

My mind is a terrible thing to waste.

This entry was posted on Wednesday, March 16th, 2011 at 18:46 and is filed under Uncategorized. You can follow any responses to this entry through the RSS 2.0 feed. You can leave a response, or trackback from your own site.

82 Responses to DEFINITION on DEMAND