UPDATE 04.14.12: As of today, neither the Texas Democratic Party nor the Republican Party of Texas is registered with the Secretary of State as a corporation; limited partnership; or limited liability company. In other words, they remain private clubs.

NOTE: Reading this article in conjunction with TEXAS TWO-STEP enhances its significance.

In the summer of 2008, before I knew half as much about the political process as I have learned since that time, I submitted a comment to the PUMA PAC blog, containing this epiphany:  the Democratic Party is only a club.

See, I had just ‘learned’ there exists a category of states I dubbed ‘vote binding states,’ which are those states that have enacted laws essentially saying, ‘In our state, being a “pledged delegate” means, you must vote for the person voters elected you to represent, on the roll call vote on the floor of the party Convention.’  (Did you know, DNC rules only require pledged delegates to use their “good conscience”?)  (“All delegates to the National Convention pledged to a presidential candidate shall in all good conscience reflect the sentiments of those who elected them.”)  (http://s3.amazonaws.com/apache.3cdn.net/fb3fa279c88bf1094b_qom6bei0o.pdf, p. 23.)

I saw that BO’s people were harassing HRC pledged delegates to change their votes to him, in advance of the Convention.  In other words, in these vote binding states, BO’s people were enticing HRC’s people to break the law.  So, I drafted letters to state Attorneys General in the 13 (thirteen) vote binding states I identified, complaining about this illegal conduct from BO’s camp.  Next, I needed to recruit voters from those vote binding states to send these letters.  But first, I had to explain to these recruits, in lay terms, what I was talking about.  For this, I developed a primer.  And in the primer, here is how I summarized the hierarchy of commandments applying to pledged delegates: state laws trump the rules made up by the political party, every time.  https://jbjd.wordpress.com/to-stop-harassment-of-clinton-pledged-delegates-in-vote-binding-states/

That’s when it hit me: the Democrats (and Republicans) are nothing more than private clubs.

THIS IS THE MOST IMPORTANT COMMENT I HAVE EVER WRITTEN OR WILL EVER WRITE ON THIS BLOG… PLEASE REFER OTHERS TO THIS COMMENT THROUGHOUT THE DAY, IN SUBSEQUENT COMMENTS… I AM BUSY WRITING YOUR STATE-SPECIFIC LETTERS TO THE ATTORNEYS GENERAL, TO BE COPIED TO OUR DEAR STATE DELEGATES PLEDGED TO HRC, TO LET THEM KNOW, WE HAVE THEIR BACKS…

If you are going crazy trying to figure out what’s happening with the Democratic Party, join the club. I’m not kidding. Join the club. Because it just hit me, the way to understand this Democratic nominating process is to think of The Democratic Party as what it is – a club. And the only thing that makes this club so special is that it was able to get permission from each of the 50 states to collect campaign contributions and put the names of the candidates it wants to hold office onto the state’s election ballot. That’s it. That’s all there is. Let me explain.

According to Party – or rather, club rules, presidential candidates are chosen at the club’s nominating convention. Afterward, the club submits the name of its candidate for POTUS to the appropriate state official in each state – usually the Secretary of State – as part of an application to get onto the state’s general election ballot, in compliance with that state’s laws. In fact, states only allow the candidate for POTUS chosen by a “major political party” to submit ballot papers so late in the game because club rules and by-laws require their candidates to be chosen at a “nominating convention.”

The Democratic Party set up volumes of rules and by-laws that govern all these operations, with auspicious sounding titles like “Charter,” “Constitution,” “Model Rules to Delegate Selection Process,” and “Call to the Convention.” But here’s the thing about all these club rules: they can be changed at any time. According to club rules. So, if like me, you have read club rules and believe, as I do, that members of the club have not played fair throughout this presidential nominating process, am I saying there is nothing you can do about it? Hardly.

Remember what I said in the beginning: the state only lets the club get onto official state ballots as long as they follow state rules. And unlike club rules, when states make rules, they’re called laws. (TO BE CONTINUED…)
©jbjd

(In the interest of full disclosure, let me say, I was banned from that blog just days after this comment was posted.)

In the 1 1/2 years since I experienced this 3:00 AM epiphany that ‘club’ is just another word for ‘political party,’ I have learned (and written) volumes about the DNC.  Now, I know it by its official name:  the Democratic National Committee Services Corporation.  That’s right; it’s a corporation.  That’s why I now regularly refer to this business entity as the D Corporation (in case you hadn’t noticed).

Before I initiated the present campaign to submit document requests to the Texas Democratic Party (“TDP”) under the Texas open records law, I had to determine whether the TDP was a covered entity under that law.  First, I tried to ascertain its legal construct. I hit a brick wall.  Luckily, through other means, I was able to conclude, the TDP is subject to provisions of the open records law, regardless of its organizational construct.  Then, after the campaign to obtain records was underway, a loyal Texan and I continued to research the nature of the TDP until we got answers.

So, what is the legal construct of the TDP?  Let me give you a hint what it’s not.

Here are the documents returned by the TX Secretary of State web site after a paid on-line search of documents held by that office, for an entity called Texas Democratic Party (“Find Entity Name Search”).  (Recall that the Certification of BO’s Nomination signed by TDP Chair, Attorney Boyd Richie, and submitted to state election officials to get them to print the name of Barack Obama next to the D on the general election ballot; was printed on letterhead showing the name, “Texas Democratic Party.”) (See this document and Mr. Richie’s accompanying letter, also on TDP letterhead, on p. 3 of the citizen complaint of election fraud to AG, in REMEMBER the ALAMO ) 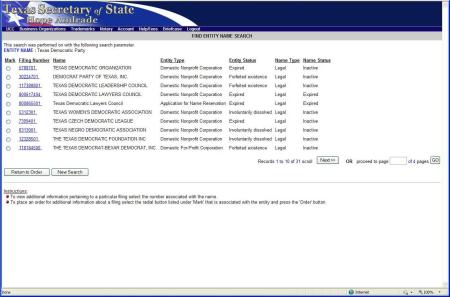 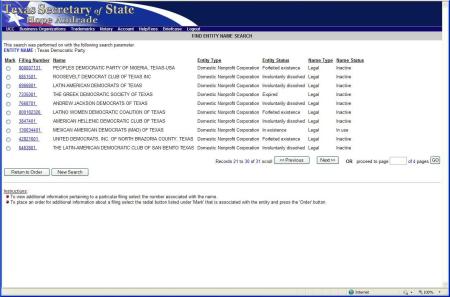 Did you notice what name is missing?  Yep; the Texas Democratic  Party.  In the words of Randall Dillard, Director of Communications, Office of the TX SoS:  “There is no requirement in state law that political parties organize as a business entity and since the parties are not found in a search of our records, they are not organized as corporations, limited partnerships or limited liability companies.”

Whoa!  If the TDP is none of these then, what is it?

Well, I tried a Google search for “clubs in Texas.”  And look at what showed up at the bottom of page 6  (not to be confused with Page Six, the NY Post scandal column, http://www.nypost.com/pagesix): Clubs and Organizations:  Texas Democratic Party 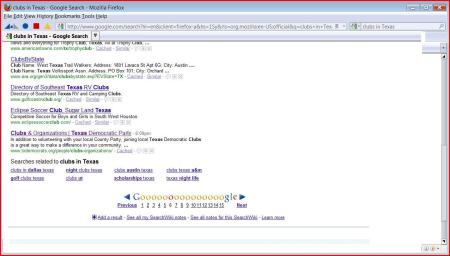 So, I clicked on that link, which led me to all of the Clubs and Organizations organized under the big top of the TDP. 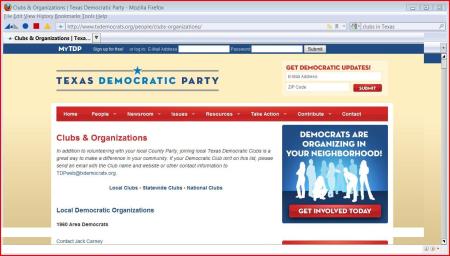 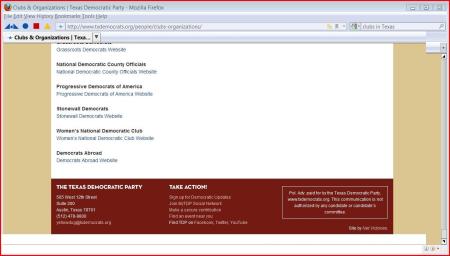 I clicked on the link in the lower right-hand corner, txdemocrats.org.  Look who was staring me in the face. 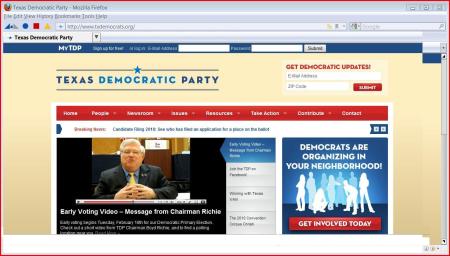 In sum, here is the answer to the question, what is the TDP.  It is the club mystically possessed with the power to get TX election officials to print the name of Barack Obama next to the D on the state’s 2008 general election ballot based only on the word of its Chair that he is Constitutionally eligible for POTUS, notwithstanding no one in the club is willing to disclose, why.

This entry was posted on Friday, February 19th, 2010 at 08:26 and is filed under Uncategorized. You can follow any responses to this entry through the RSS 2.0 feed. You can leave a response, or trackback from your own site.